Dog days of summer! Ever wonder what that phrase means? I looked it up and it refers to the period of summer that occurs when Sirius, the dog star, rises at the same time as the sun, roughly from the first week of July to the second week of August. That’s the astrological definition, but it goes on to say it is characterized by periods of inactivity and lethargy. Because it is so darn hot! Who wants to move? That is my excuse for not writing the last couple of weeks! But now I have a couple of things to share with you that I saw on the news.

First was a story on the NBC Nightly News about fitness trackers. One of the reporters conducted a very unscientific study where he wore three popular brands of trackers to see how they performed. First he walked around for an hour or so and found all three had very different step counts. Then he went to a laboratory and had a trained professional measure his calorie burn while producers counted his steps, all while he wore the trackers. If you have ever worn a gadget that counts your steps I am sure you will not be surprised that the counts are way off. My iPod has a step counter feature and I have found that there are times I have walked or jogged for 45 minutes only to have it count 2000 steps or other times I have gone for a stroll and it registered 7000! Someone told me a friend wore hers to a concert and it counted each clap of her hands as a step. Most surprising was the calorie count. Each device he wore was way off, one by almost 4 times! My take on this is that if wearing a gadget helps you achieve your goals of exercising by holding you accountable, never take it off! But remember, the information is probably not totally accurate. If you think you can eat a bag of cookies and then rely on something attached to your wrist to tell you when you have burned off the extra calories, you might want to step away from the cookies. Step at least 100 steps away. And count them yourself.

The second story was on CBS Sunday Morning. Meryl Streep is starring in a new movie about Florence Foster Jenkins, the world’s worst singer. If you don't believe me, check out this recording. She was incredibly famous in the 1930s. Perhaps people needed any distraction from the Depression. What struck me about this story was the very last line, a quote from Lady Florence herself. She stated “Some may say that I couldn't sing. But no one can say that I didn't sing.” I think this sentiment can carry over to anything we do. Just because you are not an expert at whatever you try, does not mean you shouldn't try. This women had a dream and she followed it all the way to Carnegie Hall. I also think about Eddie the Eagle, remember the Olympic ski jumper who persevered even though he had no hope of winning? Another Olympic comparison is the Jamaican Bobsled Team. Total underdogs who still gave it their all. (Those 1988 Olympics were pretty memorable!) Don't let your doubts get in the way of your achievements. Whether it is trying a new recipe, starting a new workout, making a presentation, going on an interview, etc., if you don't try you will never know if you will succeed. And if you don’t excel, one day Meryl Streep may play you on screen!

So slap on your fitness gadget (or not) and get going!

This week’s recipe is for spring rolls. I have always hated making these because dealing with the rice wrappers is enough to make me want to give up and order take out. But I have persevered and have learned it isn't that hard after all. I have also accepted that I will never be an expert roller, but just like Lady Florence, I will keep trying! This recipe is really one you can make your own. Most spring rolls are filled with rice noodles, some kind of protein, a leafy vegetable and some crunchy vegetables. I saw a recipe that used millet instead of rice noodles so I gave it a try. When I ran out of one ingredient I simply mixed all the rest together with the millet and made a salad. Kind of like the Zucchini, Cabbage Peanut Noodle Salad I posted in my last blog.

When you are rehydrating the rice wrappers, do not get them too wet! The ones I use have a little texture to them. I swirl them around in the water until they are almost smooth and then lay them on the counter. They will continue to soften while you put the filling down and will roll up nicely. The wrapper will stick to itself kind of like saran wrap always sticks to itself, so they don't have to be perfect.

*I used tofu that I baked after marinating it in the peanut sauce that I thinned with a little oil, amino acids and I added some brown sugar. I let it sit for 30 minutes and then baked it at 425 for 30 minutes.

**Use whatever veggies you have on hand or like, such as broccoli, mushrooms, green beans, etc., or use more of one vegetable and less of another.

***Use your favorite peanut dip recipe or simply serve with Sriracha sauce or any other sauce you like! 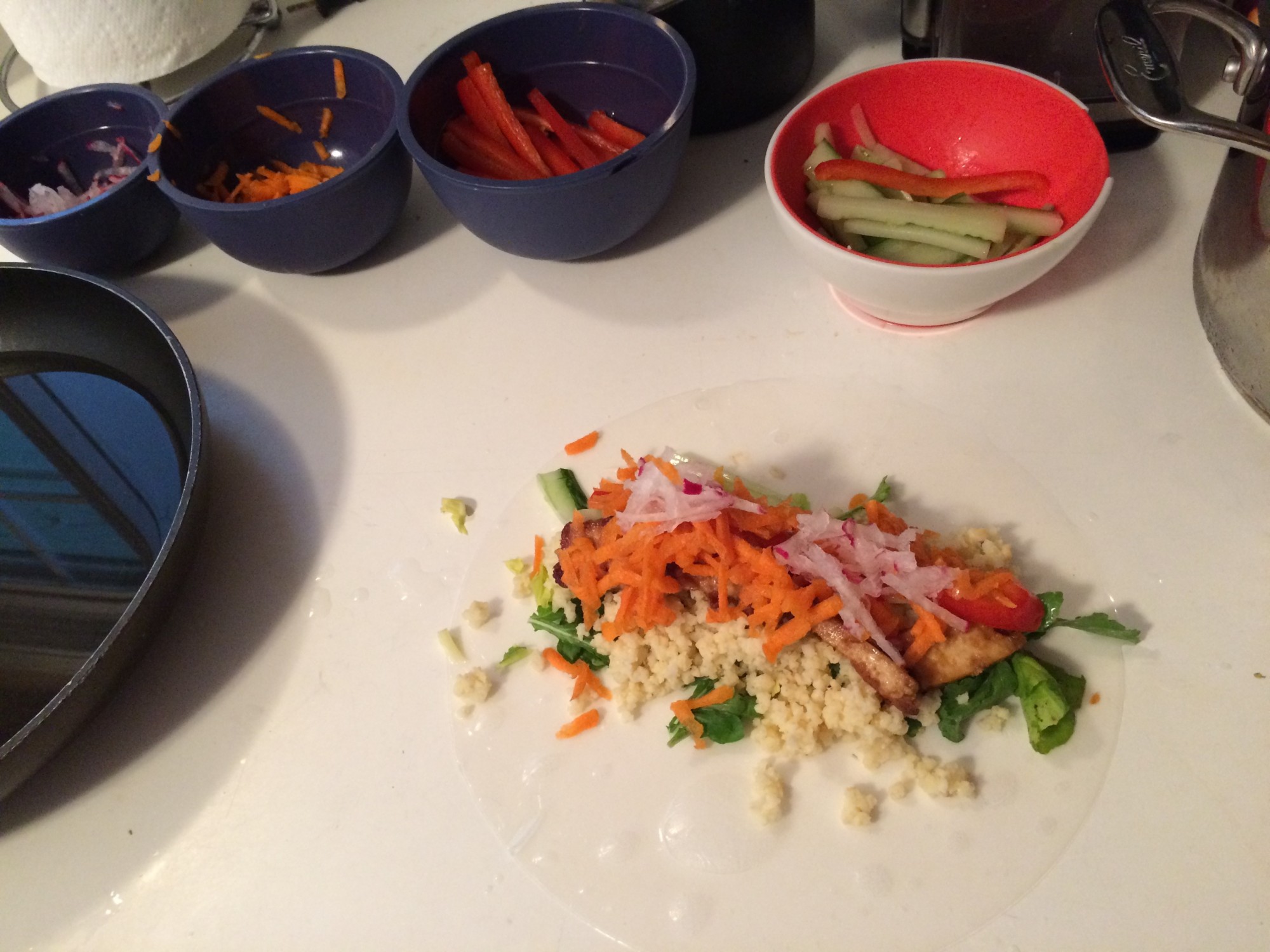 It's hard to see the wrapper on the white counter, but this is how the roll looked before rolling. 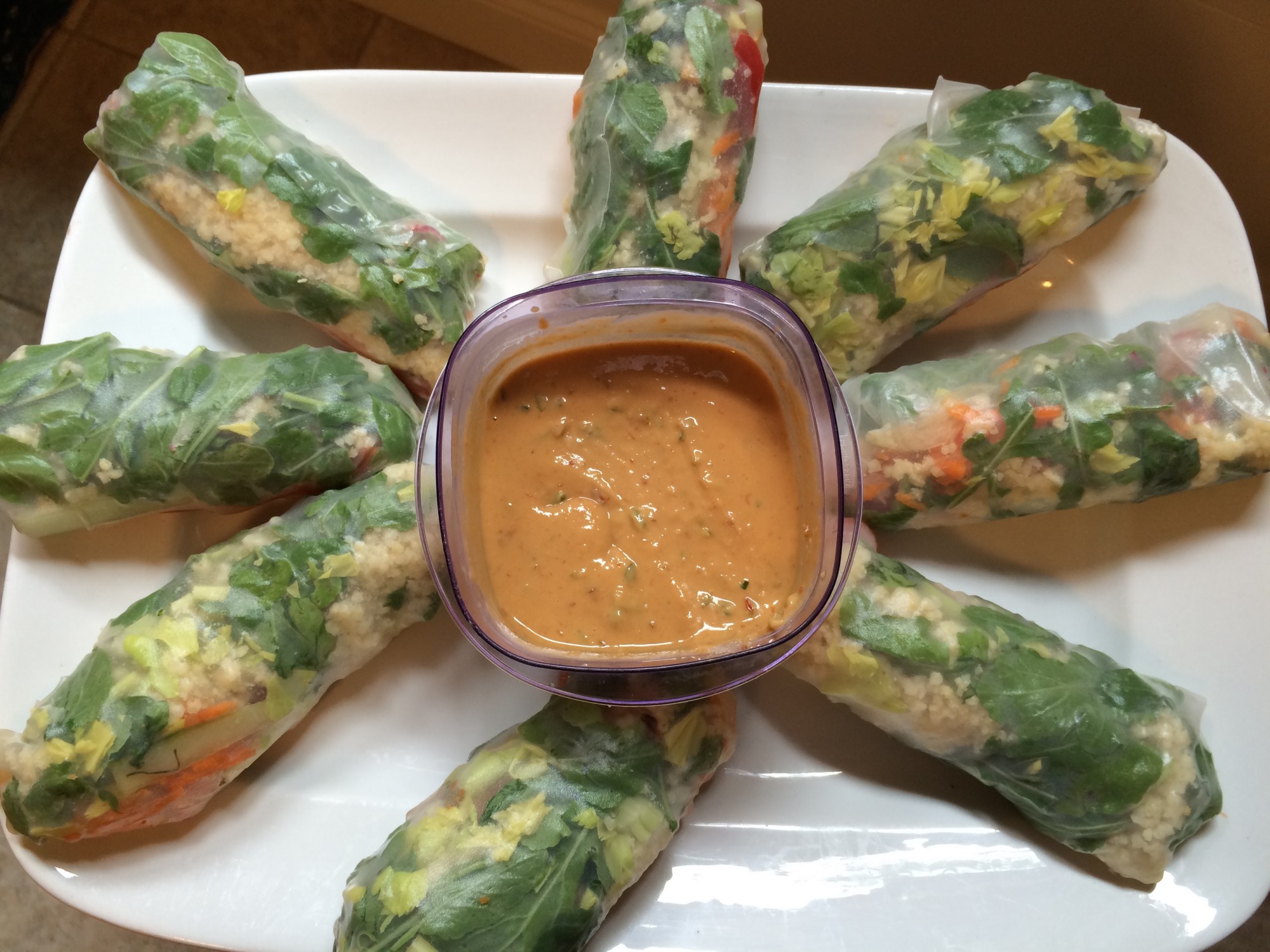 The finished rolls. I made these for dinner guests.