Do You Feel Lucky?

I would be willing to bet that anyone who has driven or ridden in a car has a similar story to the one I am about to share. I was following a pickup truck on a two-lane road. The truck was not maintaining a constant speed, usually well below the 55 MPH posted. It was also drifting from one side of the lane to the other, a few times so far onto the shoulder I thought it would end up in the ditch. I noticed the driver had his head down instead of watching where he was going. Yep, he was on his phone. Eventually he pulled into a parking lot and I continued on my way but I wanted to pull in behind him and ask if he thought he had been driving well. See, I believe that people who text or talk on their phone while behind the wheel and don’t end up in an accident think they are able to multi-task better than anyone who does crash. The truth is, they got really lucky! That truck driver was NOT driving well! He could easily have swerved over the center line and hit another car which might have involved me as well.

I get why using your phone is tempting. We have a need to find out who wants to talk to us or what the latest update is or to let someone know if we are running late. I got a new car a couple months ago and it is equipped with bluetooth. My old car was 14 years old so this is new technology to me. I can now take phone calls or make them without removing my hands from the wheel. The few times I have used this feature I found it affected my driving. I ended up at my destination and did not remember driving there! In other words, I was not paying attention to what I was doing while I focused on my phone call. Yikes! Some cars even allow you to text while driving by using voice commands. I can also do that on my phone, thanks to SIRI.  Now, however, when my car lets me know a call is coming in I choose not to answer because my priority is getting to where I am going safely.

What about you? Do you use your phone or the feature in your car that allows you to use it while driving? Here is my message today: just because you make it to your destination does not mean you drove well. You got lucky! Whenever I see someone on their phone I get so angry because they have decided that the call or text they are dealing with is more important than my life or the life of my loved ones! Let’s face it, rarely are we more than 15 minutes away from where we are going. There are very few reasons you cannot wait that long to find out who is calling or texting and why. Why press your luck?

If you need further evidence of what can happen watch this video. A warning, though, it is graphic and will make you cringe. It depicts a young girl causing an accident due to texting. Just to be fair, this could happen to anyone. Most young drivers learn from their parents. I know far too many people who use their phone while driving to stay connected to work or kids or spouses. We all know it is wrong, so why do we keep doing it? Oh, and it is against the law!

By the way, using your phone at red light or stop sign is still illegal! I can't tell you how many green arrows I have missed because a car in front of me was too busy texting rather than turning!

Serious talk is over. Let’s talk dinner. Macaroni and cheese has always been one of my favorite foods. When I came home from college for visits I always asked my mom to make hers. No boxed mac’n cheese can compare to the oven baked variety topped with toasty bread crumbs! Since I am not vegan this dish is still okay for me to eat. However, the combo of pasta, cheese, butter and milk is enough to make my arteries slam shut! This version is a bit healthier because it relies on cashews and vegetables to make the sauce. It is still a meal that should be carefully portioned out, as with any food. This recipe is what I use to start. I then add more veggies, herbs, seasonings, etc. based on what I have or what is in season.  It makes enough for a one pound box of pasta.

2 cups potatoes, peeled and diced (I leave about half unpeeled)

Juice from one lemon

Salt and Pepper to taste 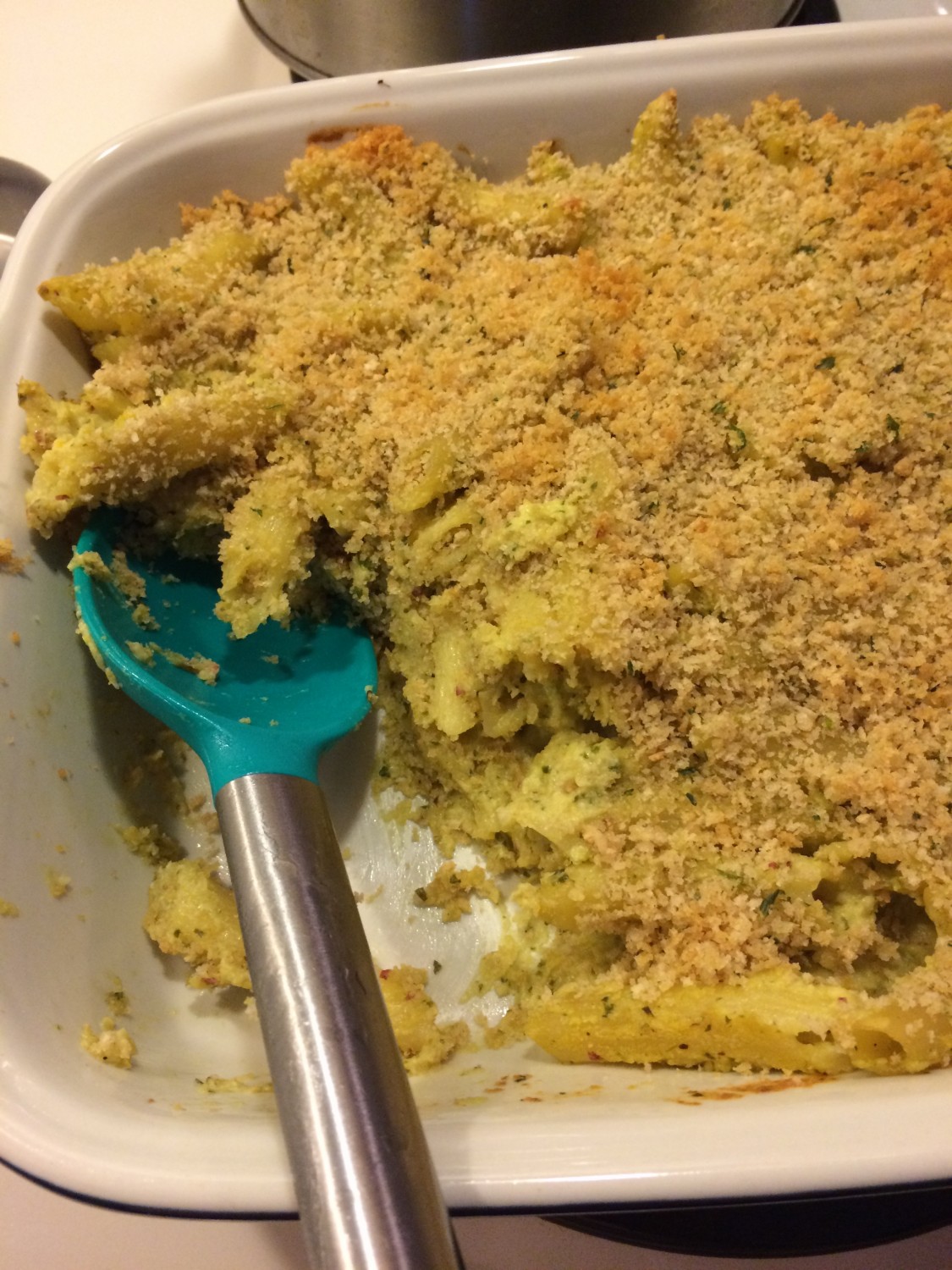 To make this I added a large fistful of parsley to the food processor. I cooked a pound of penne, al dente, and stirred in the sauce and some chopped mushrooms. I topped with bread crumbs mixed with olive oil and baked at 350 for 30 minutes.