I have voted in the last 8 presidential elections. I always try to be an educated voter by researching the candidates and their positions on issues important to me. There have been some elections where I have been very torn because each candidate had some ideas that I liked and didn't like. I refuse to be pigeon-holed into voting a party line. Having said that, in the 8 elections I have participated in, I have never felt so strongly about who I am voting for this year. Because I have made up my mind with no shadow of a doubt, I am tempted to turn off and tune out any coverage of the election. Not because I don't want to know but because it makes me stressed out and almost physically ill to see what is happening.

As a voter I like to engage in conversation with people who have decided on a different candidate from me. It can give me a different perspective on an issue or candidate. That strategy is useless this year. My husband and I discuss what is going on because we both agree on our choice for president. But if you bring the discussion up with someone who is not voting the same way it can become ugly really fast. The emotions run so high that it becomes impossible to talk issues or policies. I find myself becoming noticeably upset when I realize a person I know is voting differently from me. I feel so strongly about who should be elected that I find it hard to think straight when faced with an opposing view. Here’s the hard part for me: I have to accept that the other person feels the same way about their choice as I do about my choice. When anyone is confronted about their views it is human nature to dig in our heels and double down on our beliefs. And the candidates this year are so polarizing it is making people a little nuts when faced with someone voting differently.

I wish I had the solution to this. I cannot escape the election coverage no matter how much I try to not watch or read about it. I feel people are so emotionally invested in the candidate of their choice that trying to present information or facts that do not support their choice is useless. When someone posts a view on social media and I read the comments that follow I am appalled at the name calling, threats and hateful language. Even when the comment is in agreement it seems the writer cannot refrain from disparaging others who do not agree. I am truly concerned what will happen after the election. Can this country heal and accept whomever is president? I would not want to live in any other country in the world. Yet, I am saddened at how different this election is compared to the last 8 in which I have voted. I need to take some deep breaths and recognize that others’ beliefs are just as strong and valid as my own and the people I know that hold them are good people who think differently than me. The world would be pretty boring if we all thought the same way. And I have to say, this election is far from boring!

If you'd like to take a quiz to see which candidate you most agree with, follow this link. It takes about 20 minutes and be sure to check out the “other stances” answer for more options.

To deal with the stress of this election, I have turned to exercise, reading for enjoyment and jigsaw puzzles. In order to make time for these activities, I bought a crock pot! I will be trying out many different recipes this winter! One thing I have already noticed is the long cook times seem to sap a lot of flavor. My solution is to either bump up the amount of spice and herb I use or add more towards the end of the cook time. This week’s recipe calls for a squeeze of lemon before serving. That brought out the flavors as well. For reference, I used a 4-quart crock pot. 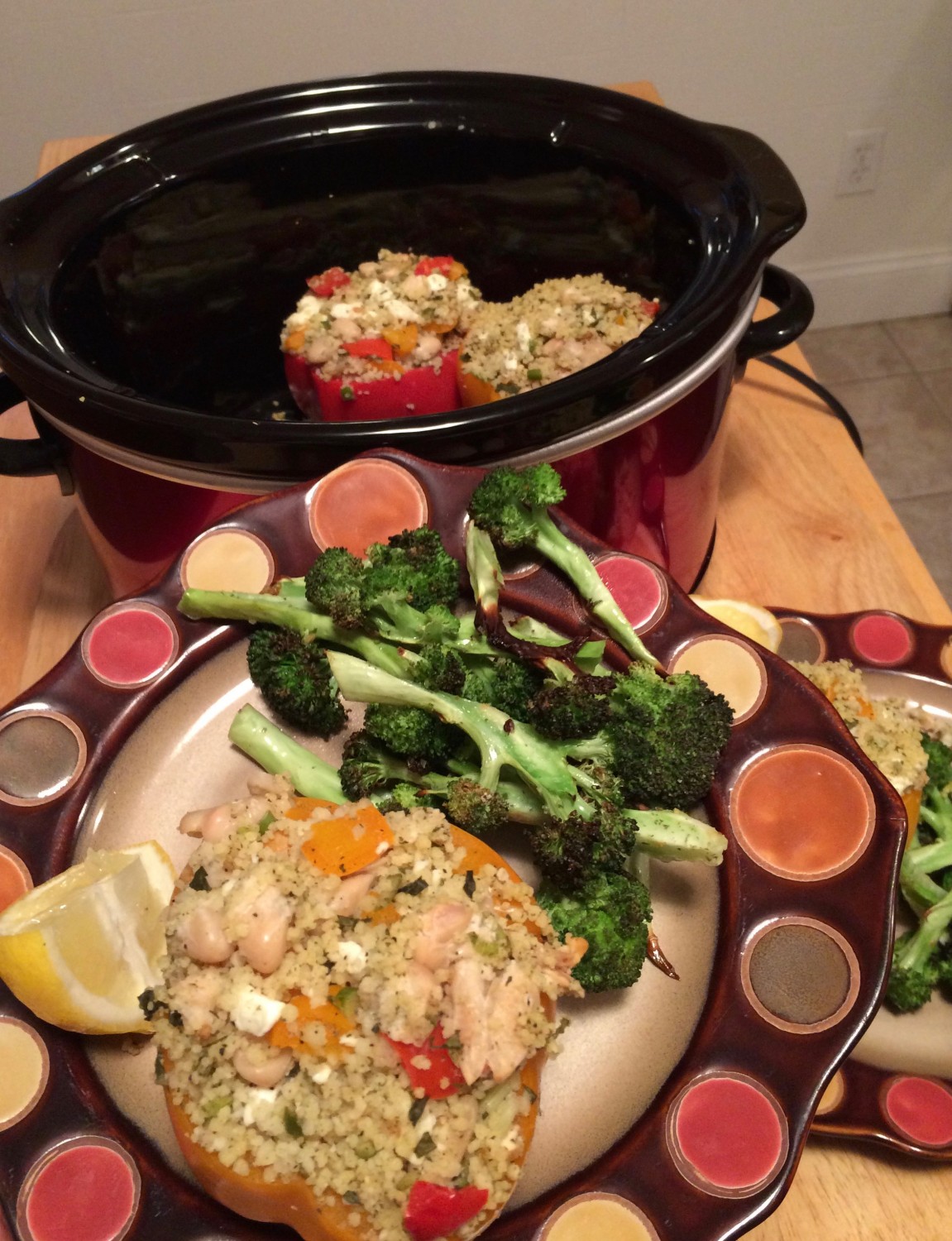 1/2 cup couscous or other small grain

You could make this in the oven, but be sure to decrease amount of spices and herbs by about half. Place in a baking dish and add 1/2-3/4 cup water in bottom to allow peppers to steam and soften. Cover with foil and bake on 350 for 45-60 minutes, until peppers are soft.