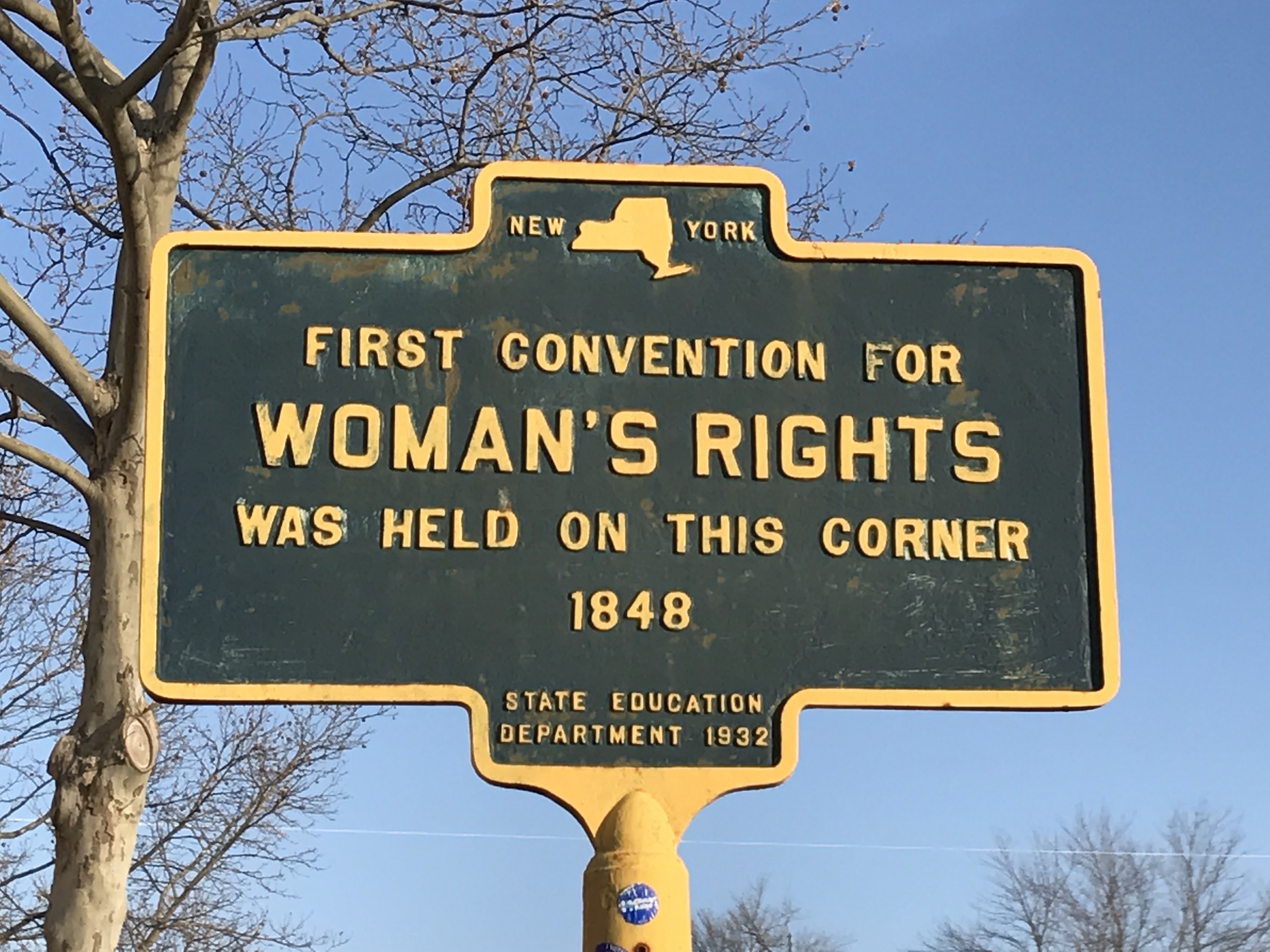 I am proud to say I participated in one of the Women's Marches held January 21. I went to Seneca Falls, New York, and stood on the same ground where the first convention for Women’s Rights was held almost 170 years ago. I listened to speeches that were inspiring, informative and entertaining. When I walked into Wesleyan Chapel where the 1848 convention was held, I was brought to tears. History has a way of doing that to me. As I stood in the crowd of nearly 10,000 people my fear of crowds never surfaced because there was so much positive energy and joy and shared commitment that it never seemed crowded.

Then I got home and made the mistake of checking my Facebook feed. In addition to all the wonderful news about the millions of people participating in marches there were a lot of negative responses that left me feeling sad and angry. These objections seemed to fall into two categories: women who proclaimed they could not understand why we were marching and those who called us whiners and told us to get over it, we have a new president.

It was the women’s responses that made me sad. Especially the copy and pasted response that went on and on about how they do not feel oppressed or any less equal than men. I was in disbelief that they did not seem to comprehend that it is due to the millions of women who have been standing up and demanding equal rights for generations that allow them to live in a world where they can feel equal. They were able to go to the voting booths in 2016 because women stood up and demanded the vote. One of the speakers I listened to is 101 years old. She remembers marching with her mother in the parade that celebrated the passage of the 19th Amendment. The fact there are still women alive who participated tells me it was not that long ago. In my career as a restaurant manager, I frequently saw the surprised reaction of people when I explained I was in charge. Recently someone asked me if I thought I was paid less than a man would have been in the same position. The question took me by surprise because I had never thought about it. When I did, I realized how ingrained it was in me, as a woman, to just accept that I had a job that could pay my bills and I never negotiated a salary. Statistics show that the women who are proclaiming complete equality probably have mothers, sisters, aunts and female friends who are making less than male counterparts. When I graduated from college I had no health care because there was no law that allowed me to stay on my parent’s plan. If Planned Parenthood had not been around I would not have had access to birth control or the exam that detected a lump on my thyroid. I am forever grateful to the women who fought and continue to fight to keep that organization in existence. There is overwhelming evidence that shows women continue to be marginalized and objectified and judged on their appearance. When I was looking for a job I had a phone interview in which I was asked to give my height and weight. It was a job for management at a hotel. I was outraged and refused to answer. Would a man have been asked the same question? I am only 51 years old and I have many examples of why, as a woman, I have been subjected to treatment that has made me feel less than equal. Therefore, I marched on Saturday to show support for the ongoing struggle to ensure that all women can someday feel the same as those who posted that they are already there. 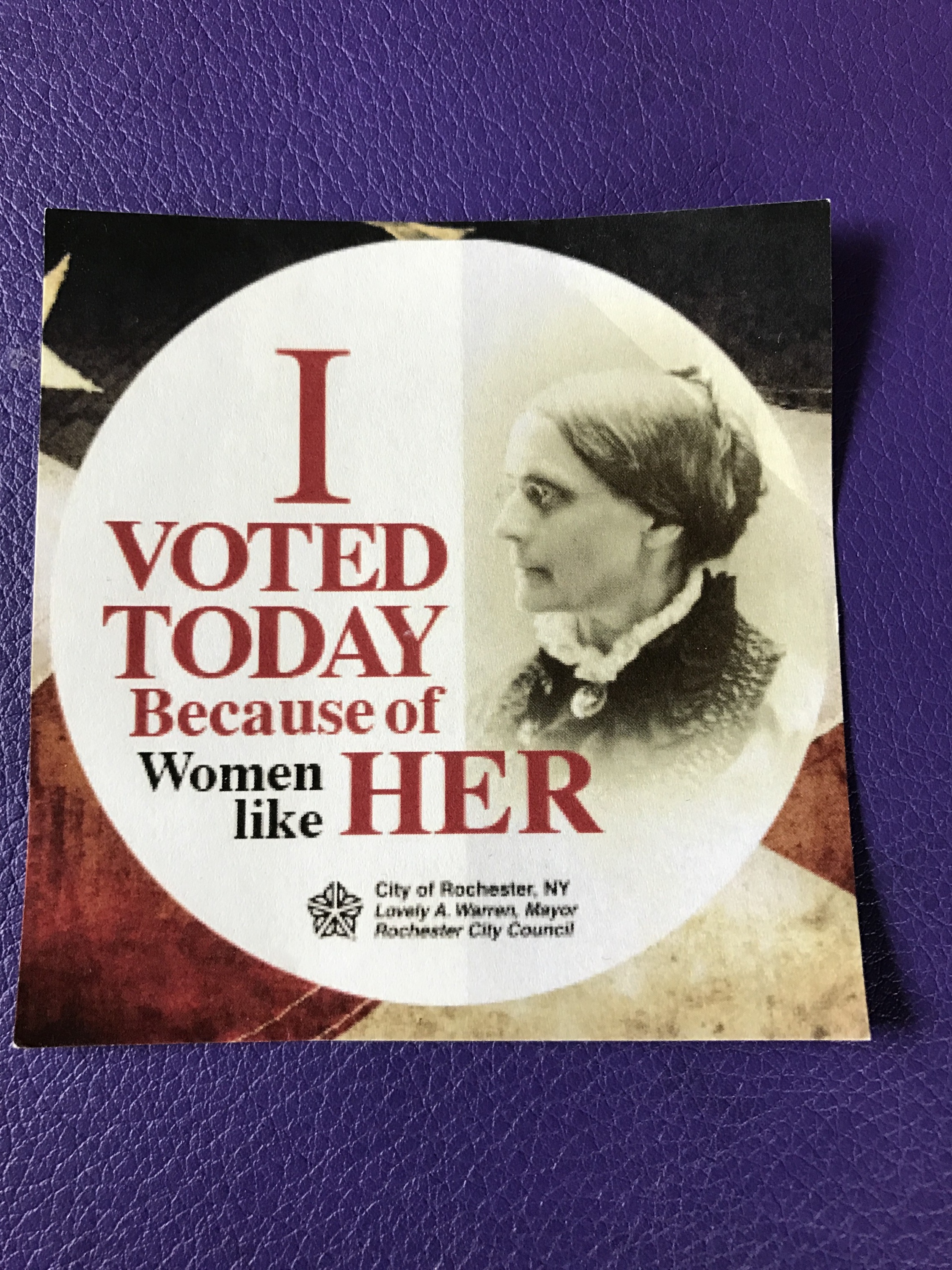 Sticker I received at Susan B. Anthony's grave on election day

Then there are the people who think that the marches were only about the election. “Get over it,” “stop whining” and “we accepted Obama without marching” were common arguments. They are missing the point. We are over it and we aren't whining and shame on them, if they felt so strongly about Obama, for not marching. What we are is determined. Determined to let all elected officials, including the new president, know we are paying attention and we want them to pay attention to us. Based on speeches made during the campaign and inauguration, it does not sound as though the issues important to women will be respected. Therefore, it became important to exercise our first amendment right to peaceably assemble and make it known we will not quietly sit back and allow any rights to be taken away. This is not whining, this is standing up for our beliefs and values. The transfer of power is complete and now we are challenging the new president to take heed that his election has mobilized millions of people who are leery of his presidency. We truly hope our fears are unfounded and the future will bring further progress for women’s rights and for all Americans. However, to discount millions of people as whiners or sore losers is to underestimate the power that we have as citizens. I marched to show I am among those who will be watching and will be ready to hold government officials accountable.

I will get back to cooking and post a recipe next week.